Summary : The Warbler Labs team proposes simplifying the design of Membership Vaults to

Motivation : In GIP-13, the Warbler Labs team outlined our proposal for Goldfinch Membership, Phase 1 of the broader tokenomics roadmap. As stated in the proposal, the primary motivation for Membership was to create stronger utility for GFI.

In the course of building Membership over the past 3+ months, we have encountered a number of complications in the original proposal that we believe should be simplified for the initial release of Membership Vaults. Specifically we propose:

Member Rewards Share Calculation: We continue to use the Cobb Douglas formula to calculate a participant’s membership rewards, as it is (a) intuitive, (b) does the best job of encouraging allocations of Capital (FIDU, Backers NFTs, Curve LP tokens) in line with the alpha parameter. To refresh, this is a governance controlled parameter that determines the optimal share of Capital and GFI for maximizing rewards in Membership Vaults. With the removal of lock ups and the governance multiplier, the rewards share function is now simplified. All values are for a given week period. 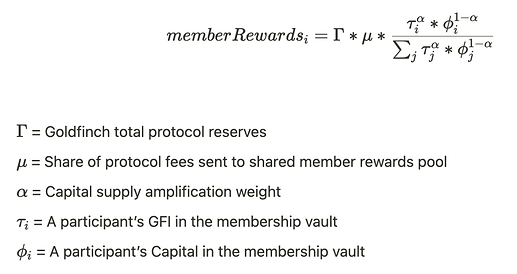 We believe that removing these features, which enable participants to enter and exit Membership more fluidly, will make the Membership program more attractive and therefore be more successful at driving GFI utility.

While we still believe this incentive structure to be valid, we believe it’s not strictly necessary for MVP. We are proposing descoping this feature for “v1” of Membership, and we can revisit it later with the community in this forum.

Rewards Epoch. With the removal of the lock up period, we need a basic mechanism to discourage front running of Membership rewards, while also enabling participants to enter and exit vaults fluidly. To achieve this, we add a requirement that users must maintain their Capital + GFI in the Membership Vault for the duration of the rewards epoch to earn rewards. Rewards are then distributed at the end of each rewards epoch.

In the original design, participants could enter Membership Vaults at any time, but could not leave the vault until the end of a reward epoch. This new design ultimately adds more flexibility for users, while still discouraging front running.

No: Preserve the original Membership Vaults design, delaying the release of this feature

I vote “Yes” to this proposal!

I have a simple question. Are there any protocols that use distribution model similar to the one proposed here?

@libratus A number of projects have built more utility into their governance token, but as far as we are away this approach of combining governance tokens + TVL into a shared vault to unlock member rewards is unique

Good proposal TBH. First we let users try out the product then we factor in long-term commitments.

Council has approved the proposal